As this is my first blog post for the museum, I thought I'd start with a quick introduction! My name is Sarah, and I'm an educator at CMNH. I've been working here for about three years, and I've done everything from putting on a production of “The Little Red Echidna” (an adaptation of “The Little Red Hen,” of course!) to talking everyone's ears off (children, parents, and staff alike) about NASA's New Horizons mission on Pluto Day! I'm a poet, sci-fi nerd, enthusiastic baker, and can bust out soprano arias in four different languages if asked (I have never been asked...).

But... what exactly is a maker? The museum hosts the Dover Mini Maker Faire, there are makerspaces popping up all around - it's a maker revolution! But what does it mean? Even when I first started hearing that word thrown around, it was obvious that it was about more than just people making stuff (although people making stuff is super cool all by itself!). The Maker movement has taken on its own philosophy – it's about learning, creativity, DIY, technology, curiosity... Want to know how a computer works? Take it apart and look! Want to create a beautiful piece of jewelry? Grab some wire and beads and experiment! But I think perhaps the most important part of the maker movement is this: All these cool things you want to try...you don't have to do them in a vacuum.

The maker movement emphasizes learning through doing, but it also encourages social interaction.

It encourages getting together and figuring something out with your friends, and finding a makerspace where you can learn from experts, or passionate amateurs, or somebody who tried the same thing last week! It's about sharing knowledge, and sparking curiosity – nurturing our innate and insatiable desire for the how and why behind everything.

It's with that philosophy in mind that I started working on CMNH's newest traveling program – our MAKER CLUB! Beginning this fall, we're bringing 4-week sets of after-school activities to schools in the area that focus on all different kinds of creations and the science behind making them. I've been having such an awesome time creating the curriculum that I wanted to share some of the projects we're going to be working on!

Session One of Maker Club is all about electricity!

We'll be playing with circuits and lights and fans and motors, and learning about how electricity moves through them all. We'll also be creating these nifty guys:

This is an ArtBot! It only takes a few simple parts to make one – there are even kits available online that have everything included. But if you want the option to customize all your parts and experiment with different techniques, you might want to buy the pieces separately.

Here's everything I used to make the ArtBot pictured here: 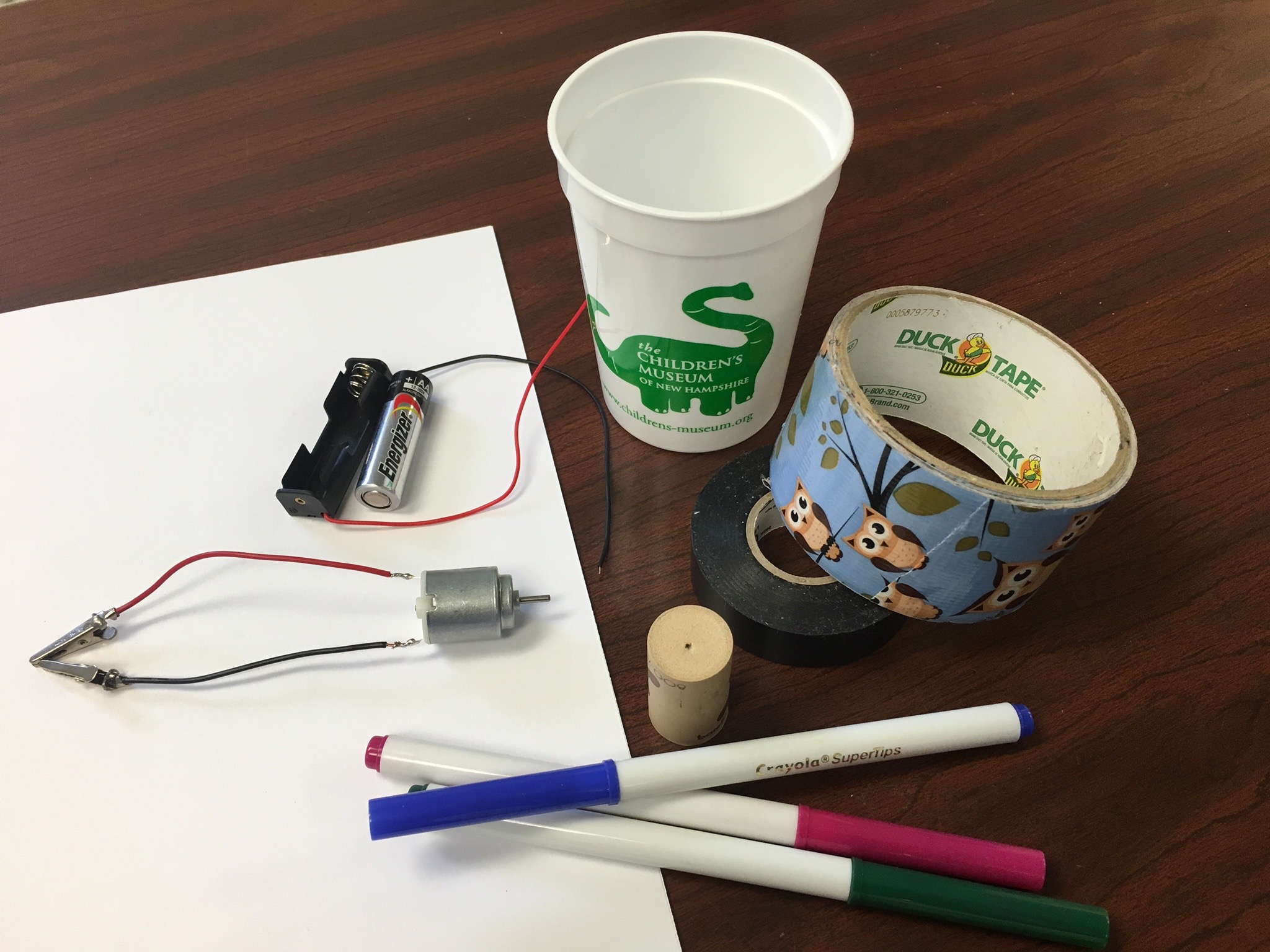 Now, I went through an extra step before I got started and soldered lead wires onto the motor itself, but you can also just get wires with clips and clip them right onto the motor. But I really wanted to learn how to solder! It's neat!

Get the complete step-by-step instructions here in a handy dandy printable PDF. 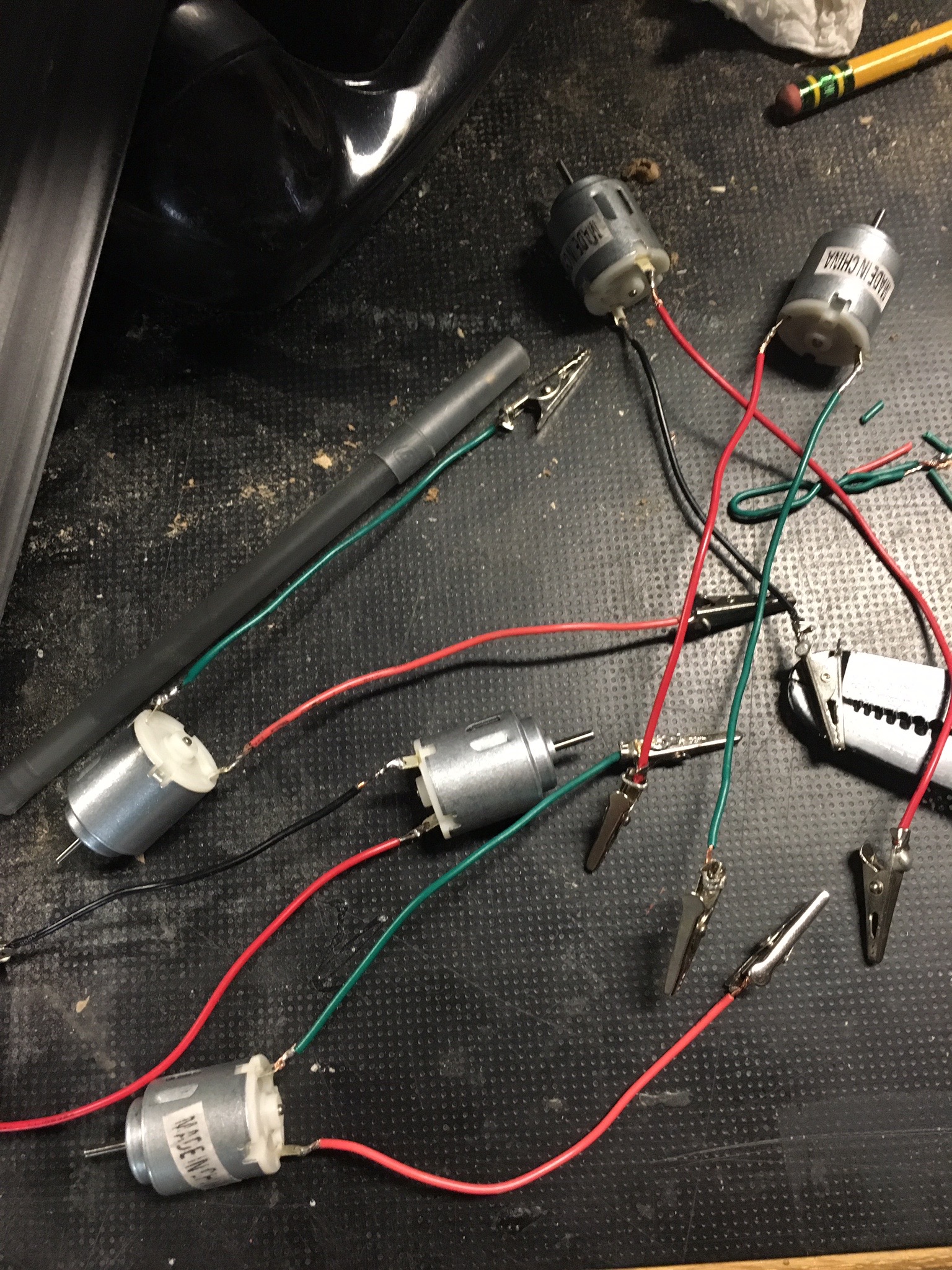 Soldering is the process of joining together two or more metal items by melting and flowing a filler metal (called solder) between them! It involves high temperatures and molten metal, but it is actually pretty easy to do (at least to do poorly – my joints work but aren't exactly pretty!). Consider buying a soldering iron, and trying it out for yourself. There are a ton of instructions online, or you could check out a local maker group like Port City Makerspace in Portsmouth, NH, and see what resources they have available!

Want to learn a little more about electricity? Check out this information sheet from our Maker Club!